Getting My Kicks on Route 11

Living The Life Of A Have-Not

As my Aer Lingus flight was queued for take-off, the pilot came on and said, “I just wanted to let you know, Gold for Katie. Gold for Ireland”.  And that was it, with that one simple statement, the entire plane erupted into cheer as this was the first gold for Ireland in the games and I immediately knew it was going to be madness when I arrived at the Irish House.  As expected, the Irish House had a massive queue and once inside, it felt like an inferno.  Luckily, I headed over straight from the airport and was carrying all my worldly possessions so I changed into something a little bit more temperature appropriate right in the middle of the bar (not the first time I’ve done this in public or the last as I’ve had enough practice where I can do this without any of the naughty bits being revealed).  My actions were greeted with a stern lecture from an older lady while being applauded by my own generation for taking charge and being comfortable!

Aside from my little exhibitionist display, the entire place was buzzing as there was a rumour floating around like a butterfly that Katie Taylor was going to be headed to the Irish House. The entire room kept chanting, “Katie, Katie, Katie” as we watched her give interviews and people mistakenly thought they had seen her in the building and instigated a mad rush to the door to greet the Irish hero of the hour.  The drinks were flowing freely as the excitement and merriment was through the roof.  The heat, however, was getting me down but leaving meant there was no getting back into the joint so we did the only sane thing, beelined for the rooftop terrace.  I was just looking for a cool breeze but soon discovered that this is where the VIP lived and knew of Katie’s arrival time into the Irish House.

This was Day 1 of my Olympic journey and by all accounts a smashing success.  A good time was had by all as I made new Irish friends and reunited with old ones.  By the end of the night I was hungry (after all, a burnt cheese toastie was all this young lass consumed all day) and tired but totally ecstatic that I was at the Irish House on such a big night for Ireland.  As for Katie Taylor – lady is total class as she did indeed make it out to greet her adoring fans that night.

The Scar That Will Not Heal

Posted on August 7, 2012 by leftturnahead

Two-time triathlon medallist Simon Whitfield leads the Canadian Olympic Team into the Olympic Stadium with the flag during the opening ceremonies of the 2012 London Olympic Games. So much work for this moment. Let the Games begin and be proud, Canada! COC photo by Jason Ransom.

As the Olympics pull into the home stretch, I only have a few more sleeps left before I’m London bound.  Don’t get me wrong, I’m tickled pink as tickets are secured, plans are in place, friends are gathering, and a couch in a swanky London flat has my name written all over it but there’s that one thing that I can’t seem to forget.  Yes, that nagging voice at the back of my head that my hell or high water desire to be in attendance at these particular games stems directly from the fact that I was robbed of the chance to see the winter games in my hometown.

The dirty details about why this happened won’t help rewrite the past so the last thing anyone needs is for me to rehash boring stories about how an En Francais Fella hit it on the nose with the statement that double z’s are always a bad sign.  If its true that time heals all wounds then I’m not quite sure what went wrong in this case.  Regardless, the reason why this is of any significance is that for the first time ever, I’ll be landing somewhere with an insanely over-hyped expectation of greatness.  London will not be my magnificent hometown transformed to tremendous heights to greet the world where an insider could have gotten me into the VIP section of the closing ceremonies.  Despite any common sense that I possess, my expectations are no less for London 2012.

Granted, my level of common sense is probably lower than the general public but truth be told, I’m expecting the unicorns shooting out of a monkey’s ass along with a symphony of fire kind of fabulous.  Without any inside connections, I’m not sure how far my wit, charm, and fast talking ways will get me into VIP exclusiveness.  The thing is, when I dream, I tend to dream big and so I’m not the girl heading to the games with the dream to kiss an Olympian as I would rather be the girl who walks away from these Olympics with stories that rival the ones that friends have of the games in Vancouver.  Trust me, this is a difficult feat as my inner circle has tales of endless events, pop up bars, VIP this or that, and closing ceremony seats with unlimited bubbles under their belts.  My idea of going for gold is to top these stories with my fabulous tales of the games in London.  I guess time will only tell if I end up having the time of my life or fly back to Dublin with my head hanging low and filled with disappointment.

The lesson learnt today is that I would make the world’s worst Paparazzi. The object of my affection was the Olympic Torch and my personal mission was to capture the torch as it made its way through the streets of Dublin. Okay, so I give myself daily missions right now just to get out of bed but I’m unemployed and living in a new city where I barely know a soul – DON’T JUDGE!

Anyway, when I started looking at my photos, it was very clear that I captured less of the torch and more of the heads, elbows, knees, and toes of the pushy photographers who managed to shove themselves in front of me at just the right moments. After several disheartening pics of the torch hiding behind someone taking photo, I started to think it was a better idea just to take crowd shots and even better than that – the Garda on horseback. I can assure you that the appeal of them had nothing to do with the fact that these policemen on horseback might ever so slightly resembled the RCMP.

Despite the fail attempted of becoming paparazzi, I can assure you that I’m richer for the experience. At the end of the day, I walked away with 3 maybe even 4 photos that I’m proud of and can already feel the excitement about the Olympics bubbling inside of me.  Today just reminded me that I can’t wait watch the games unfold in person in London!  And then another personal mission popped into my head – get better at taking action shots in order to have a stellar album of my time during London 2012! 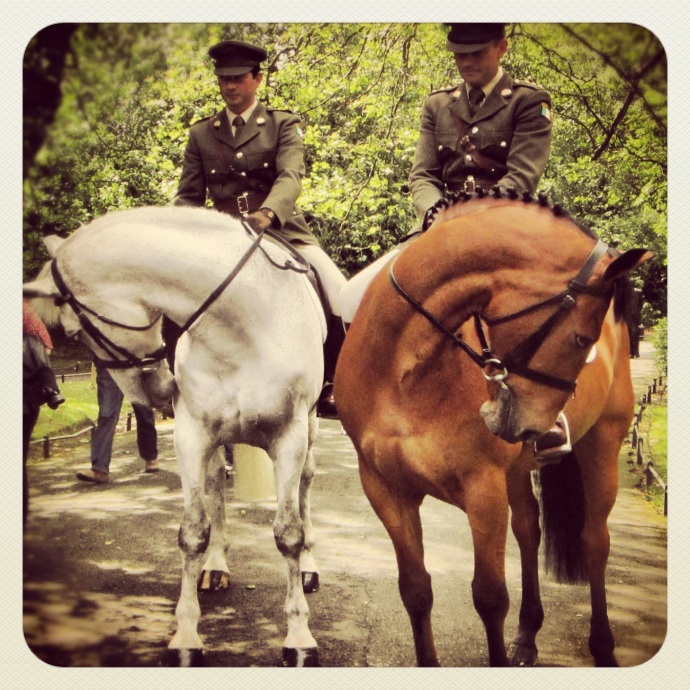