My Heart, My Soul, My Berlin

Posted on January 9, 2013 by leftturnahead

Where A Wall Once Stood

As I continued making the rounds in Germany with my travel weary soul, I never in a million years would have suspected that I was about to set foot in a city that would turn my world upside down.  Truth be told, despite all the rave reviews, I had yet to find a city in Europe that I felt an instant connection with.  The moment I took my first step in Berlin, that all changed as the love affair began at first sight.  It was gritty, vibrant, and all-encompassing while being entrenched in history at every turn that left me wanting more.  As quickly as I expressed my fondness of Berlin, I had someone tell me that I only liked it because I had an appreciation of street art and they themselves disliked the city because it was dirty and ugly since graffiti was everywhere.

Turns out beauty is really in the eye of the beholder as one of my favourite daytime activities during this trip was a street art tour.  The tour that I’m talking about is a free tour given by Alternative Berlin Tour.  After a little difficulty locating the meeting spot (truth be told, an issue with the 3 people looking for the meeting spot and had very little to do with the location itself), we soon discovered there were 2 guides and an army of people looking to go on the tour.  With a bigger group than usual, the 2 guides divided the group up at random and me and my buddies wound up in David’s group.  He’s a street artist from Berlin who had taught himself how to speak English (rather well I might add) and was now our fearless leader.  Before long, we were off at lightning pace to see what he enjoyed the most about the city and being a Berliner.  It was here that I was introduced to Alice and El Bocho’s Little Lucy.  As we walked up and down streets, it was easy to get absorbed by the art that was all around us and then David would point out something small that would remind us of the WWII legacy that is ever-present in Berlin. 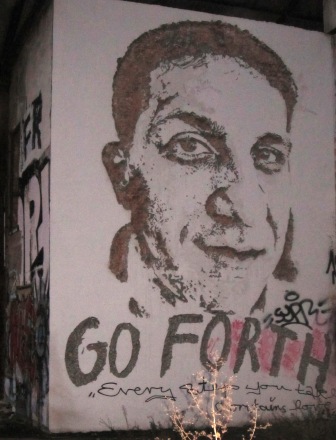 Portrait Of His Daughter

A Reminder Of The Past

We ducked in and out of alleyways and took quick peaks into galleries before hitting the streets again.  We jumped onto the U-Bahn/S-Bahn to cover more ground and be able to hit some of the cultural neighbourhoods and artist squats that were a must on this tour as well as being able to see some of the murals done on buildings out the windows.  At an alarming pace, we worked our way around the city and managed to see places like the Bethanien House and YAAM beach despite it not really not being fake beach weather in the middle of winter.  As we moved from place to place, David shared stories and legends that existed in each of these places as he pointed out his favourite parts and pieces of work throughout the city.  As the sun began to set, we continued winding around the city to just that one last location.  After spending all day pounding the pavement, my body was starting to feel the toll of the wear and tear but yet, I couldn’t resist soldiering on and following him every step of the way as my camera battery slowly died from overuse.

Bethanien House – Amazing Inside and Out

After about 4 hours, it was time to bid adieu to our large group and I stood there with the 2 buddies that I had begun the day with when we abandoned the rest of the group at Checkpoint Charlie to make our way to the TV Tower for this tour.  Despite the exhaustion that was setting in and the big evening ahead of all of us, there were no regrets.  This was amazing and was just the icing on the cake to a city that was already completely fabulous.  What I do know for sure is that the next time I’m in Berlin (plans are even being tossed around as I write this), I will retrace some of these exact steps so I can keep exploring the raw art and culture in the detail it deserves and then continue on to see parts of the city that I never made it around to during this visit.  Until then I can just dream of the next time I’ll be able to wrap my arms around Berlin again. 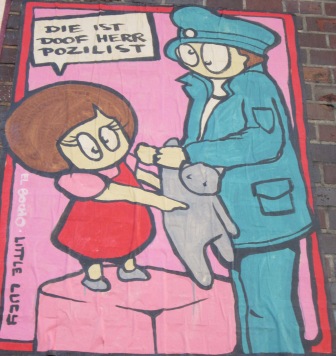 What Is Art Anyway?

One Man’s Junk Is Another Man’s Treasure

Posted on January 8, 2013 by leftturnahead

As I stood looking at essentially a pile of junk on a traffic island, it never occurred to me that this was where I’d get that fairy-tale story I was so desperately hoping for at Hohenzollern Castle.  It’s a story about a Turkish Muslim man named Osman Kalin who saw a vacant piece of land from the apartment he was renting and dreamed a little dream.  This empty plot of land existed because of the Berlin Wall and during the construction of it there was a bend in the border and the East Germans decided to just straighten the wall instead of following the curve.  Rumour has it that this piece of land was used as a dumping ground for people’s garbage until Mr. Kalin saw its full potential.

The House Made Of Junk

His vision for this land was to construct a garden and house for his family.  The house was built using all the odds and ends that was discarded on this empty plot of land.  This isn’t one of those unique structures seen on the Home & Garden channel where you jaw hits the floor when you release it was built out of junk.  From first glance, it is obvious the type of materials used to build the structure and there is no apologizes for it whatsoever.  Despite the building materials, the structure that stood before me was sturdy but my story isn’t about the values of reduce, reuse, recycle but one about what a man fighting the good fight to keep his home.  Sure, when the building was first constructed, neither the East or the West did anything to challenge him.  Unfortunately, that was not the case after reunification and the fall of the Berlin wall.  The authorities (aka the man) decided that Mr. Kalin’s house needed to be demolished.  Not to give in, this Turkish man stood strong and wouldn’t let his home be taken away that easily.

Despite the opposition he faced – HE FOUGHT!  Evidence of this fight can be seen today as Mr. Kalin cemented every piece of furniture to the ground in the fear that the man would come and take them away.  This was his home and despite the authorities trying to take away this plot of land, there was a zoning law that turned the tides in Mr. Kalin’s favour.  It turned out that the land actually belonged to a nearby church and not the administrative body trying to take the land away from him.  This building couldn’t be demolished without prior consent from the church and so this Muslim man had no choice but to lobbied to a Christian church for the sake of his home.  If you thought this would end in Muslim vs Christian heartbreak than you’d be wrong since the church liked Mr. Kalin’s way of life and family ethic and they decided that he should stay exactly where he is.  In the end, it was this church that made it possible for this man and his family to remain in their home.   Even though it wasn’t the case on the day that I visited the house, I was told that even though he’s now 84 years old, Osman Kalin can still be seen sitting outside and his grandchildren running around in the garden.  To me, this is the stuff of fairy-tales.

Posted on January 7, 2013 by leftturnahead 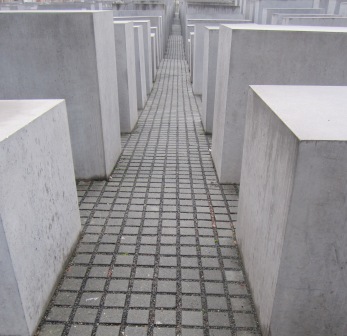 None of my photos do it justice as wandering through this memorial, you’re left with a feeling of isolation and confinement.  There was just shy of 40 of us roaming through it at the same time and as we randomly turned a corner, we would be shocked to find that we almost ran into someone else.  When we all reconvened at a near by coffee shop, we used words like cold, coffin, and confusing to describe the feelings we had when we made our way through the memorial. 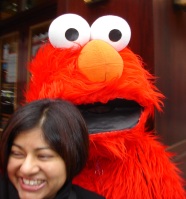